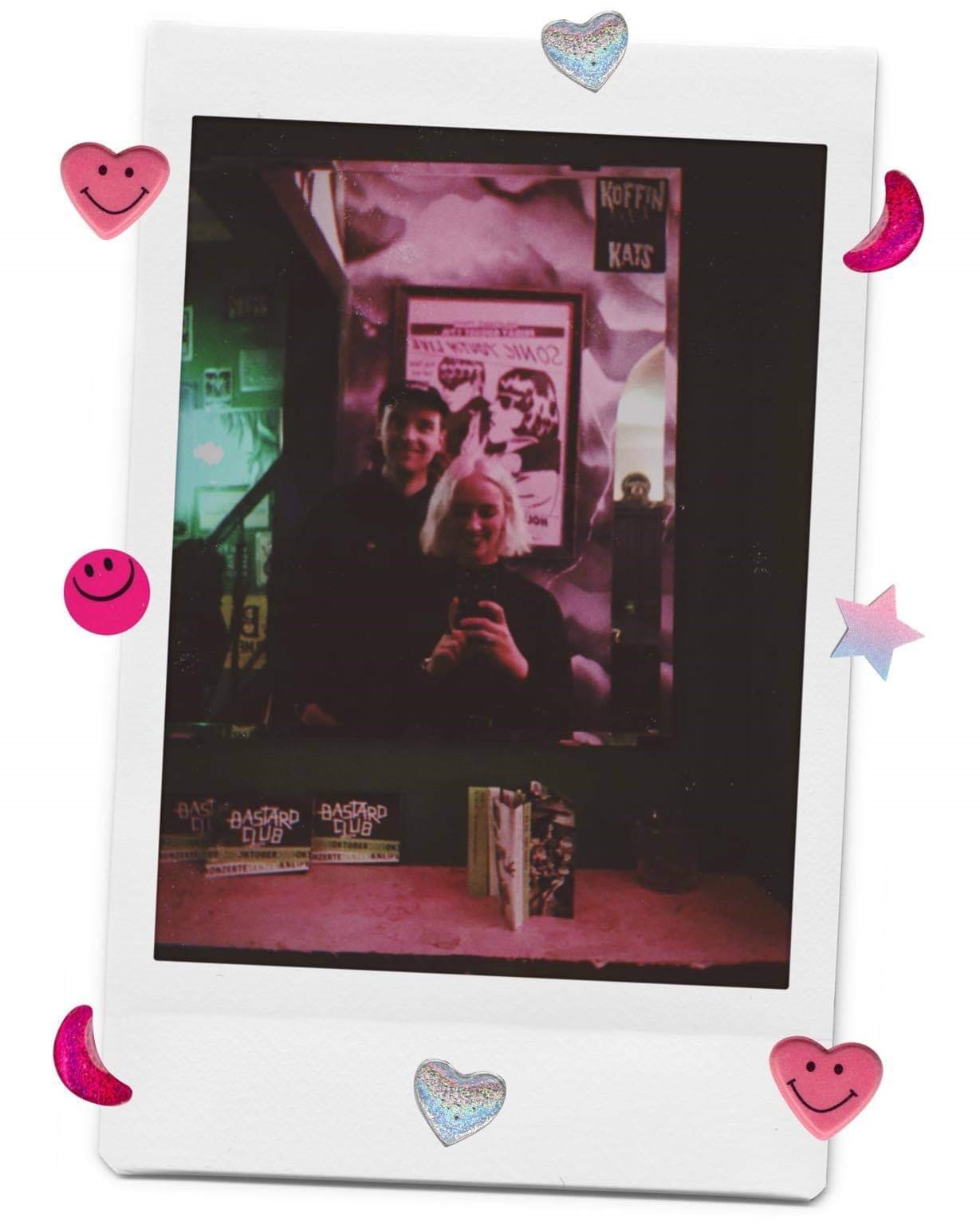 The feminist punk duo around Okay Bye from Exeter (UK) will release their new work “Personal Hell” about Schaedelbruch Platten on 01.01.2021. Up to now I didn’t have the band on my screen and find their work very interesting. That’s why I can’t pass an interview here and have invited the band for a little talk. You can read the result in the following.

Hello Grace and Tom, you haven’t been around that long. Tell us how you found together and what was your inspiration to start a band?

Tom: having been in bands since the age of 13 and living in a small city I have always been excited to get new people into music and expand on our small but great DIY punk community here in Exeter. When I met Grace she expressed that she loved writing songs and singing but any time somebody (usually a man) offered to accompany her, they seemed to have an ulterior motive… I suggested she try out the guitar so she could accompany herself and said I would happily join her on bass or drums or whatever she needed until she found her own band

Grace: yeah people have come and gone from our lives playing music with us but at the end of the day it’s so easy to coordinate practices/gigs/tours as we live together already and we have such a great dynamic in our relationship, which definitely passes across to our music, so we thought why not make the most of that without complicating things with additional people!

What can you say about feminism and its development in your environment and society?

Grace: when I was at university I would always describe myself as a feminist, however I feel sad that certain people calling themselves feminists are actually not striving for equality and have some very toxic ideas. I feel I am a true feminist, as is Tom, as we both firmly believe in equal rights and equal opportunities for any gender.

How is the theme of feminism reflected in your songs?

Grace: I feel there is still a horrible amount of pressure on both women and men to be these ridiculous, old-fashioned stereotypes where men have the responsibility to bring in the money and women should be mothers/wives – and if that’s not the case people think there’s something wrong with you. Anyone who has listened to Okay, Bye will probably know this is a strong theme in our songs such as Alone (The Spinster Song) and Expectations. A lot of the time when I write songs it’s because I’m feeling very passionate, whether that be because I’m angry or frustrated or sad (and very occasionally just really happy…) and a lot of the things in my life that make me angry or frustrated are around these stupid patriarchal stereotypes and the pressures put upon us because of this.

Have you decided to focus on feminism as a band or are there other important topics in your work?

Tom: Grace and I have very similar views on many things which is why we work so well as a couple. Because Grace is the lyricist, I would never ask her to write about something or suggest she changes the points that she brings up in her songwriting, as it is very personal to her. This has never been a problem as I strongly agree and empathise with what Grace sings about as I think many people do!

Grace: I never write songs for anyone other than myself – they are like a diary for me – but it makes sense that many people empathise with our lyrics as I tend to write about the frustrations of being forced to live and work in a capitalist society, the pressures of being a young creative, and the difficulty in finding time for yourself and to pursue your passions when we have so many other demands on us.

How did the collaboration with the German label “Schädelbruch Platten” come about?

Both: Last autumn we played a gig in Dortmund as part of our European tour with Disgusting News. The gig was so fun and we absolutely loved the fierce energy that Disgusting News had. Patrick and Vanessa, who are both in the band, also run Schädelbruch Platten and it turned out they loved us as much as we loved them. They asked if we would be interested in working together and we have had the BEST time getting to know them ever since.

Did you also get other partners on board for your debut album?

Tom: No, it’s just us and Schädelbruch Platten. Grace designs all of our merch, as she is also an illustrator, and I recorded, mixed and mastered hour record so we can keep our costs down and keep this whole thing super DIY!

The cover is not really typical for punk. What is behind it?

Grace: As one of the themes in our music is rejecting society’s pressure to conform to norms such as marriage and motherhood, the cake with the sassy ‘Okay, Bye’ written on it is supposed to be both ironic – because it’s rude rather than a soppy love message – but also a celebration that our life is really great just the way it is without following these typical steps. Also, it was delicious.

Your favourite song on the album? Why this song?

Grace: My favourite song on the EP is bubble because it felt really great to get those feelings out and then even better to realise that other people felt the same. When we perform this live it feels extremely empowering, considering the lyrics are so vulnerable.

Tom: Although Grace and I collaborate a lot on the song writing and arrangement of the music, when it comes to this band i really love playing live and touring the most. The most fun ones to play on drums live are Alone and Personal Hell!

How do you deal with the current situation with the Brexit? What will be better from your point of view and what will be worse for you privately and as a band?

Grace: To be honest it’s hard to see a bright side. Neither we nor any of our friends wanted this to happen and it is quite frankly heartbreaking. When we went on tour last year both Tom and I felt like needed to keep apologising on behalf of the whole of the UK for being idiots, as all of the European people we have ever met have been ridiculously kind, welcoming and friendly and we are embarrassed of our awful government.

Tom: Brexit will make touring much more difficult and much more expensive so we feel very lucky to have lots of good kind friends in Europe who have expressed that they will help us out to make sure that this is possible. We feel the same would love to help any European bands who want to tour in the UK (once it is safe again) by offering them a place to stay, a good meal, or anything else. But yeah, i agree with Grace, Brexit is Brex-shit.

Why a release in this time? Don’t you see a certain risk there?

Grace: Personal Hell was written almost a year ago and we were hoping to release at the start of summer and to have just returned from tour a couple of months ago. Since finishing recording Personal Hell, we have written almost an entire album and it felt silly to just be sitting on all of these songs, waiting for the end of a pandemic with no certain deadline… At the end of the day, we do this because we love it – so if other people can enjoy it too and want to support us to continue making music by ordering our vinyl or merch then that’s all we could ever ask for.

What do you want to give the people out there in the end?

Grace: I only picked up a guitar for the first time in my life three years ago and it has been one of the best things I’ve ever done. I want our music not only to resonate with people and maybe help them to realise they aren’t alone in how they feel, but also hopefully to inspire people to make music of their own. Honestly, anyone can do it! It’s not easy, but it IS fun and it IS possible.